Sponsorship: Kigali is about to welcome the biggest comedy festival in Rwanda!

Kigali is about to welcome the biggest comedy festival in Rwanda! 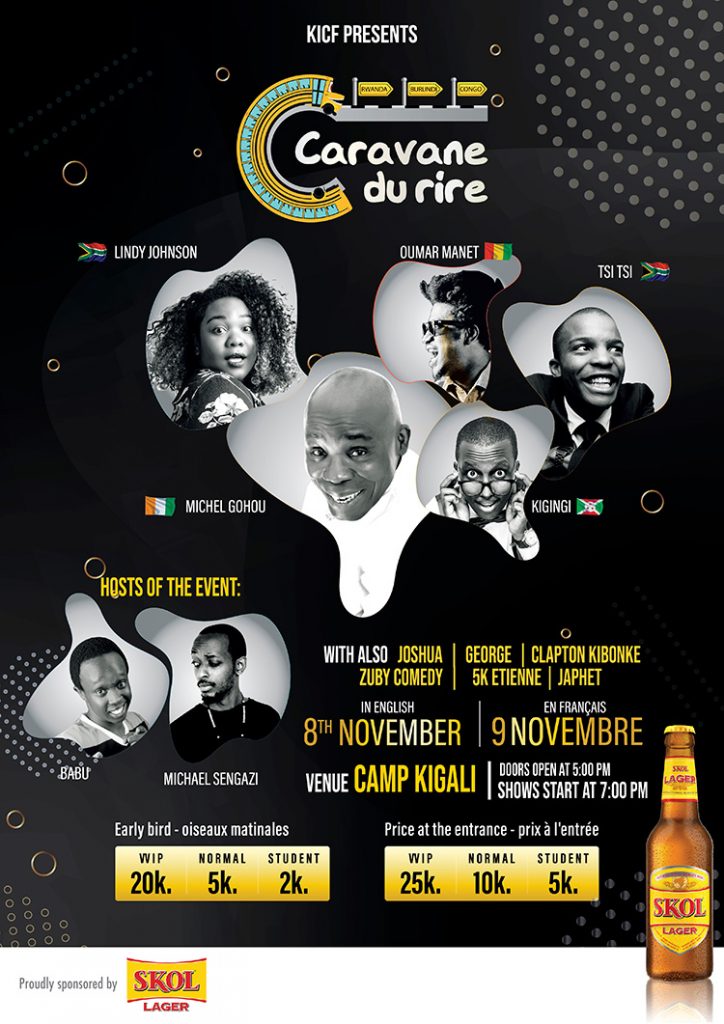 SKOL Lager with its goal to support the development of comedians and bring laugh to its consumers is partnering with Comedy Knights for the “Kigali International Comedy Festival” third edition that will be welcoming “CARAVANE DU RIRE”.

Caravane du rire is a festival that will start in Kigali, continue to Burundi and have its finale in Congo.

The festival itself is a celebration of laughter and enjoyment. From school tours, to charity events, and finally the main shows. The comedy knights in partnership with SKOL Lager will be rocking Kigali upside down.

School tours have an objective to motivate young students and to inspire them to do and be more through comedy or art in general while offering them the possibility to perform for the ones that have what it takes. The charity event is a way for the KICF and their partners, to give back to the community.

But the main events of the festival, will happen on the 7th, 8th and 9th.

The first show in Kinyarwanda, which will happen on the 7th, will be a free show with Rwandan comedians, from groups like the comedy knights with Babu, Michael, Joshua, George and more, the Daymakers with Clapton Kibonke, 5K and Japheth known in the “Bigomba Guhinduka” and the young and talented Zuby comedy with Fred, Kepha lee, Sam, Toussaint, etc.

The second show in Kinyarwanda and English will have headliners from Rwanda, Clapton, Joshua, 5K & Japhet, and more, Kenya with Oliver Otieno aka YY, Lindy Johnson and TSI TSI Chiumya from south Africa, Burundi’s own Kigingi hosted by Babu and Michael,

The last show in Kinyarwanda and French will also have our headliners from Rwanda and the best francophone comedian in Africa Michel Gohou from Ivory Coast, Oumar Manet from Guinee Conakry; Joyeux Bin Kabodjo from DRC and Kigingi from Burundi.

The entrance fee for “early birds” is:

2K for students with ID per show; 5K for a normal ticket for one show; VIP for one show is 20K; VIP for two shows is 35K

The entrance fee at the door per day is:

The shows on 8th & 9th will start from 7pm at KCEV (former Camp Kigali).